You are here: Home / Areas of Expertise / Civil / Rachel Bennett 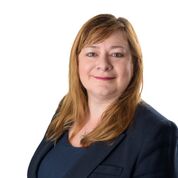 Rachel is a member of the Family Team. She joined Chambers after completing her specialist family Pupillage under the supervision of Elizabeth Willsteed (Recorder).

Whilst practising with Chambers, Rachel has acquired experience across all areas of Private Children Law, Public Law and Applications for Injunctive Relief under Part IV Family Law Act 1996 (domestic abuse).

Rachel has represented parents, children (through their Children’s Guardian) and other family members in care proceedings and in Applications under s8 Children Act 1989, as well as acting for Local Authorities in care proceedings. She has frequently been instructed in Part IV Family Law Act 1996 (domestic abuse) proceedings in which she has acted for both male and female parties to a former relationship.
Rachel is popular for her approachable yet professional manner with lay clients, and sensitivity and skill in communicating with vulnerable and distressed clients, and those with additional needs. She has been praised for her negotiation skills and her ability to assist clients with entrenched views in reaching settlement.

Prior to Pupillage, Rachel was a solicitor most recently running Exeter University Community Legal Helpdesk. She was also an Associate Lecturer, teaching and examining in the Law of Torts, Negotiation and Advocacy, as well as writing Negotiation examinations. Before Admission as a solicitor in 2008, Rachel worked for several years as a Paralegal in a broad range of legal practices Alongside this, Rachel worked as a Special Constable in Bedfordshire Police and later Devon & Cornwall Constabulary. In Bedfordshire, she gained the rank of Special Inspector and Tutor Constable and was awarded two Chief Constable’s Commendations and three Divisional Commander’s Congratulations for exceptional service. She has also worked as a freelance legal researcher, and in this role was commissioned by a former prison Governor and adviser to the secretary of state for justice to produce research on the topic of extremism in prisons and the rehabilitation of radicalised offenders.
Rachel studied Law at the University of Cambridge under the direction of Tony Weir, during which time she also sang as a Choral Scholar in Trinity College Chapel Choir. She subsequently undertook postgraduate studies at the Inns of Court School of Law, and City University, London.

Rachel grew up in Yorkshire but moved to the South West in 2003 where, in her spare time, she enjoys walking and exploring the coast and countryside with her children and partner. Rachel’s hobbies also include singing professionally both in the UK and internationally, teaching singing, and choral conducting.